Posted on September 19, 2013 by yachtbaringo

The first night at sea after leaving Santa Marta was as stormy as it threatened, so we used the  radar to try  and dodge the squalls  but the lightening was all around us . We avoided most of the rain and there was not too much wind but we were unable to maintain our course overnight .The daylight as always was very welcome even though it was overcast  but we managed to sail until midnight that day when the wind disappeared completely so we motored most of the night with only a little lightening. We had a pleasant third  days sail with beautiful cloud formations, sunrise and sunset. We paid for it that night with terrific rain and lightening but surprisingly little wind. We could not navigate away as the system was too big and the lightening was right over us and really quite frightening as apart from stowing the oven with the electrical gadgets there is nothing to be done .Our wind vane suddenly stopped after a huge lightening flash followed by an immediate thunderclap so we thought we had been struck, but luckily everything else continued to function so we are still not quite sure what happened and whether our tried and tested method of hanging jump leads with wires attached from the shrouds into the water saved us. 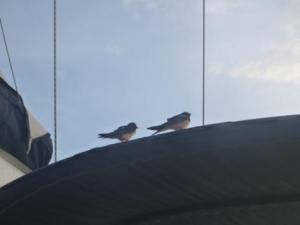 By dawn the weather had calmed and we were approaching Porvenir island where we had to check in to Panama but the wind was stronger now and so we stood off for a couple of hours before entering as there are a lot of reefs in the islands and the anchorage looked a little crowded. Also our depth meter was not working and we were not sure if this was related to the lightening strike or the usual delay we have experienced after being in very deep water. The wait was a good decision as the wind calmed and with it the sea and we anchored easily even without the depth meter. We  decided to postpone the  check in until the following morning and it  was much calmer then and we were much less tired so the dinghy ride did not appear so daunting. It is interesting if you enter Panama by boat the visa is 100$US but by air or land it is 10$US. We had the amusing experience of being checked in by a large lolly pop sucking officer who never once removed the lolly pop from his mouth ! Sadly no photo of this incident is available.

There is a small airport on Porvenir so we watched several small planes arriving and departing while we wandered around the island. The San Blas are a semi autonomous  area of Panama governed by the Kuna Indians who are guarding their independence and modus vivendi very keenly. We set off to explore this interesting archipelago consisting of many flat sandy palm covered  islands ,some are inhabited some barely existing as they are so small and flat .We spent the next seven days exploring various islands using the excellent pilot book by Eric Bauhaus; in fact it would be impossible to do this safely without his guide as he has charted depths meticulously himself and made many detailed charts, a true tour de force invaluable for us and presumably many others .The islands are a tropical idyll- clear warm water , coral reefs ,untouched white sandy beaches fringed with palms and all enhanced by the delightful Kuna Indians selling their molas which are beautiful cloth pictures .There are no provisions available anywhere we went so we were completely self sufficient but we had catered for this .We had the water maker which as always makes life much less stressful and more comfortable and we were even able to make a few litres for a kuna family .The time was very relaxing but there were more yachts than we expected for the low rainy season so I think the area  is being discovered .At the moment no one other than a Kuna can own land so if this lasts development may be delayed but if you want to visit go sooner rather than later .We had mixed weather but nothing too serious thankfully but the gadgets were in and out of the oven a few times  .We luckily missed the fabled chocasana a sudden strong wind from the south which has put many craft onto the reefs . 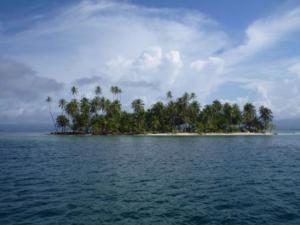 Coco Banderas one of the SB islands 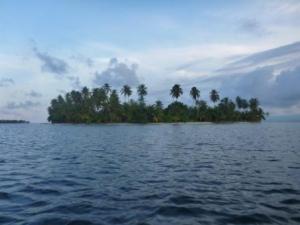 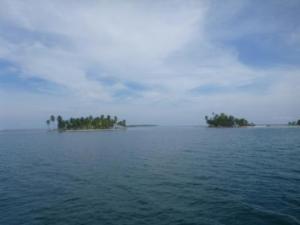 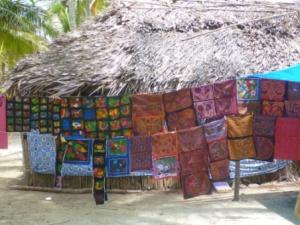 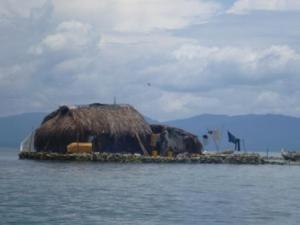 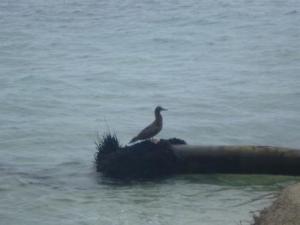 We reluctantly left for Porvenir on 6th September to check out and set  off towards  Colon and the canal entrance. We had a very gray journey along the coast and stopped in a large bay after dark thinking there would be no problem as there were no hazards according to Eric’s guide. Unfortunately the marina in the corner of the bay had put unlit entry buoys since the guide was published! The gods were smiling on us as we narrowly missed them and had a quiet night at anchor. A dawn start to get to the marina in daylight and  we approached the Panama canal entrance marked by two huge breakwaters and lots of anchored vessels by late morning. We had a great sail to finish the journey and very exciting to have reached so close to the Pacific ocean. 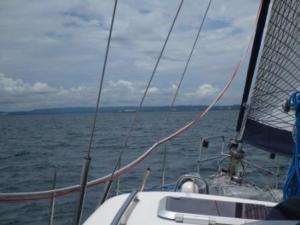 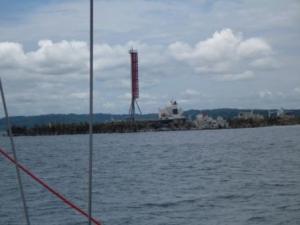 We settled into Shelter bay marina thankfully the other side of the bay from Colon which is essentially a no go area. Jeremy left for Panama city and his journey home and we spent the next few days doing the necessary jobs for the canal transit. Luckily there is a shop, a swimming pool and a restaurant to ease the pain ! Our transit is booked for the 24th September so we have time for some local exploration until then ….so for that see the next episode!