Posted on September 29, 2013 by yachtbaringo

Jeremy departed for Panama City in the afternoon of the day we arrived , so good timing for him. Almost immediately he had left our agent for the canal transit arrived to go through the necessary processes. Some yachts  do it themselves without an agent but we decided on the easy option. Eric was very pleasant and efficient and also reassuring. We were in no hurry to transit as we were waiting for Janet and Dale to arrive from the UK to help us with the journey. It is compulsory to have five on board to handle the lines, it is also advisable to do a practice run on another yacht but at this time of year there were no other yachts so we could not do that so we hired two professional line handlers to help. Although expensive we felt they were worth it in the interests of the safety of the boat. An advisor /pilot is obligatory as it was in Suez.

With all that organized we were free to roam after servicing the engine and a few other small job. Shelter Bay marina is in the middle of the jungle so no entertainment there so we had to look elsewhere and decided on the archipelago of Bocas del Toro. We had thought of sailing there but met a skipper of a catamaran in the marina who had just been hit by lightening on his return from Bocas and lost all his electrics so the decision to go by air was made without any disagreement !

We flew in a small plane from Albrook airport a former US air force base and had a wonderful view of the jungle and the coast and then walked from the airport in Bocas town to our hotel only about 10 minutes ! Bocas town is very tranquil but has many interesting  hotels built over the water with superb sea views. The restaurants are good and there is lots of choice but despite this degree of tourism the quiet laid back atmosphere remains. We did the usual bicycle exploration of the main island stopping on deserted beaches. The next day we  took a water taxi  to Bastamentos another island in the archipelago and we were left on a deserted beach with no obvious way out although we had seen in trusted Lonely Planets there was a path along the beach to where we were meeting the boat later in the afternoon. After some anxiety we did find the path and had a walk through the thick jungle which came right to the edge of the beach. There were several more long golden uninhabited beaches before the end of the day and then we took the water taxi back to Bocas. We flew back the next day and landed just before a huge storm.  Janet and Dale arrived so after a few days relaxation in Panama city we started the final preparations for the transit 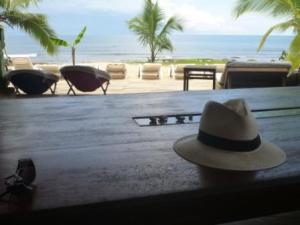 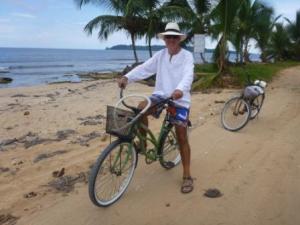 We took delivery of extra fenders and 4 long blue warps first and then the  line handlers arrived at mid day and we left for the so called Flats anchorage about 30 minutes from the marina to await the advisor. We could see several vessels exiting the Gatun locks and several waiting to enter but until the advisor arrived at around 4.00pm we did not know which one  would share the locks with us. Everything is left to the last minute so we did not know what system we would be using to get through the locks. We left around 5.00 pm and headed towards the lock gates and found we were tied up to a tug and a small pleasure craft, the tug took the wall then the pleasure vessel and then us and curiously we were behind a large bulk carrier  from Hong Kong! The walls seemed very high and the water became very turbulent as it flowed into the lock and even more when the container ship started its engine to move forward to leave the lock. Luckily we survived undamaged and went into the next two locks in the same configuration for the same experience. Then we were in Gatun lake a very large man made lake  created by damming the Chagres River. Umberto and Jose the line handlers  found a buoy to moor onto for the night and we all had a few beers and supper. At 06.15 the next day the new advisor arrived and we set off across the lake on  a beautifully calm morning cruising through the jungle looking at the birds sitting on the mooring buoys .Next is the Gaillard cut where the canal was cut through solid rock probably the most difficult part of the task. Then we arrived  arrived at Pedro Miguel lock around 11.00am and this time we were along side a small training  vessel with lots of school children on board. We were now   going down which was significantly calmer than going up. Then there is the small Pedro Miguel lake and then the final two Miraflores locks to go down to the Pacific. This time we were on our own in a vast lock so we had to catch the lines thrown from the side and attach these to the large loops in the 4 blue warps which were then attached to bollards in the shore. The bell went when we were all ready and down we went letting the lines out as we descended. We were then walked through on the lines to the next lock and down we went again so smoothly we were unaware the descent had started …no doubt which is the easiest locking process ! The gates opened and we were in the Pacific Ocean …quite a moment . 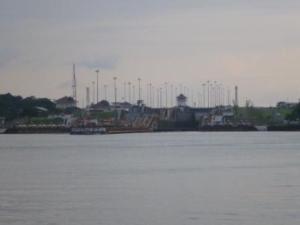 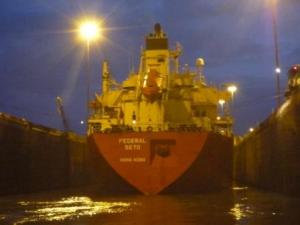 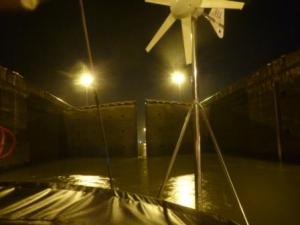 taking in bow lines as doors open into Pacific ocean

A  launch came for the advisor and then another for the line handlers and the equipment and it was all over and we were still afloat and undamaged .We were all rather tired and the wind was strong so we decided to anchor in the municipal anchorage rather than take on a potentially tricky marina entrance in a cross wind .

We had a great evening accompanied by a dramatic storm and a few celebratory drinks! The next trip is to the Las Perlas islands in the Gulf of Panama .