It was difficult to leave Medana Marina but we felt the need to press on although we had actually forgotten that our Indonesian visas were only for 30 days and when we did finally leave we had no days to spare! However the relaxing atmosphere in Medana had successfully removed these dull administrative matters from our minds so we were lucky to have summoned the will power to move on when we did!

No sooner was Baringo out of the bay she was in a 30knot breeze with accompanying waves so we were too late to hoist the mainsail. We managed well with the little jenny close hauled until the wind veered to north west and then south east and the sailing became more comfortable off the wind. By the morning of the next day 29th October we were approaching P.Kangean where there was a gap to sail through and although not that narrow the sea was so confused with waves coming from all angles and no wind to hold the sails with the motor. We consulted the Dashew Bible but even he did not have a good answer to improving this unpleasantness only an amusing few words to describe it! Fortunately once through the gap the waves settled and by midday the sea had settled and we stopped for the daily oil check, essential with long motoring hours we were doing .In the calm of that afternoon we hoisted the mainsail and dispensed with the flapping jennies. We passed Madura island and its fishing fleet that evening and as we are in the Archipelagic Sea lane there little time goes by without a large tanker or bulk carrier passing. The Indonesian fishing fleets is enormous, we have never seen so many fishing boats anywhere else the numbers certainly do not seem sustainable. On the afternoon of the following day we were treated to a NE wind and had a lovely sail which continued until the early hours of the next morning. We had Kalimantan on our port side but we were further offshore now so fewer fishing boats that night. Stephen Davies advised keeping slightly east closer to the Kalimantan Coast to avoid unmarked hazards to the west and he recommended two “gates “ between shoals and reefs to pass through for a safe passage so we followed this path and had no problems. 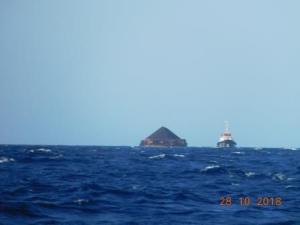 We were passing between P.Belitung and Kalimantan keeping closer to Kalimantan and there is a line of reefs and shoals extending eastward off Belitung where again there was large fleet of fishing vessels. Actually passing through them was not as difficult as we had anticipated as they moved out of our way once they had seen us and all we saw were lit ,some scantily though. We had the usual mixture of sailing and motoring, probably more of the latter so refuelling was becoming imminent and we decided that doing this in the Archipelagic Sea lane was foolish and made a course for P.Serutu to anchor and do the refuelling in peace and out of danger. November was ushered in with a serious lightning storm  in the evening after a very sultry day so it came as no surprise but luckily neither wind or rain was that difficult and we escaped a direct hit.

On the morning of 2nd November we reached P.Serutu near P.Karimata just west of Kalimantan and anchored in a very pleasant bay but initially we had a NW wind blowing straight into the bay putting us squarely on a lee shore  but luckily this changed as the morning progressed to SE and the anchorage became well protected. We had a restful day and completed the always unpleasant job of refuelling ,the diesel always seems to get where it is not wanted so the cleaning up afterwards is messy. We had decided to stop at two more anchorages en route to ensure arriving in Nongsa Point in daylight so the remaining journey did not seem too much of a marathon.

rock in serutu bay only apparent at low tide.

We had a quiet night at P.Serutu and departed at 05.45 on Saturday 3rd November and were rather surprised to see two unpleasant looking rocks further in which had not been visible at high tide when we arrived but luckily we had anchored further out although in our searching for the best spot on arrival we may not have been that far away. We continued NW with the usual mixture of sailing  when the wind allowed and motoring when it did not ,we had more night time lightening but no major squalls and at 00.15 on Monday 5th November we  crossed the equator and put our party hats on and toasted King Neptune with a beer. Only a couple of hours later we felt our toast had been wasted as a huge black squall confronted us and we turned tail to the SW to avoid it which we did. Once it had passed we headed towards P.Mesanak which luckily had an anchorage sheltered form the NW winds which were now with us most of the time .It was a large bay with a well marked entrance and as usual we had it to ourselves. 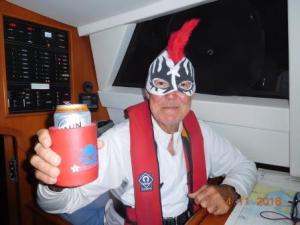 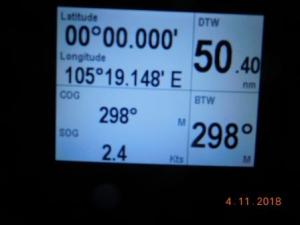 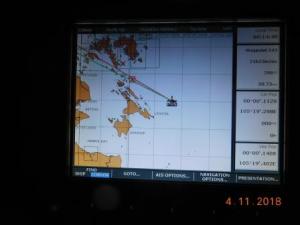 position on the equator 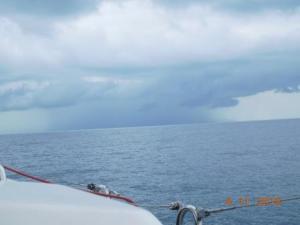 We had bought Indonesian Sim cards in Saumlaki and were delighted to see a mobile phone mast on the island so had high hopes of getting 3G but we could not and were not sure why .We learnt later that an Indonesian Sim card to work it needs an Indonesian ID card number,so ours were doomed from the start but luckily had not cost a large amount of money . This apart the anchorage was very calm and peaceful so a chance to prepare the boat for Jane Houng’s arrival in Nongsa Point and catch up on some sleep.

We had a choice for the next anchorage; another island bay but open to the NW or in an estuary north of Tanjung Pinang, Bintan Island in a small port but protected from the NW. We decided on the latter as the wind seemed to be predominantly for the NW now so set off early the next morning for Tanjung Pinang and arrived at the entrance to the port which is up a narrow and shallow channel early in the afternoon. All the marks were present and gingerly made our way to the anchorage spot while being overtaken by high speed ferries on all sides. It was a very busy port with vessels of all shapes and sizes crossing the estuary as there was no bridge between the two sides of the town. The water was full of garbage including lots of worrying plastic bags but we felt we had made the right choice as the NW wind blew quite strongly all night. 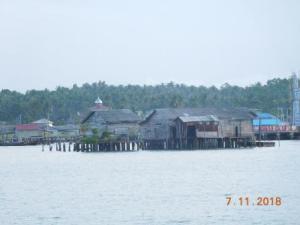 On Wednesday 7th November we made our way out again luckily avoiding any encounter with plastic bags and headed for Nongsa Point through the Selat Riau with Heavy industry was on both sides and lots of commercial shipping on the move or at anchor, all the way to Nongsa Point as well as numerous ferries dashing past. We had seen on the chart and read in the cruising guide that we might have 5kts of current against us here and the Selat  is relatively narrow but I think Neptune took pity on us now and we had an easy journey with the current helping us all the way ! At midday John sighted the sky scrapers and casino of Singapore, rather an exciting moment for us although we were not counting our chickens just yet .We rounded the North eastern point of Batam island and then approached the entrance to the marina which runs parallel to the Singapore ferry entrance so it is vital to pick the correct channel . Luckily we did and the staff were there to greet us and take our lines so we were tied up by 14.00 on Wednesday 7th November .

We sorted out the usual documentation and then had a welcome swim in the pool. We had actually swum very little on this trip as Australia had killer jelly fish and crocodiles and we had not felt inclined in the anchorages after the snakes’ appearance in the cockpit and the dirty water we had seen everywhere. The marina was part of a golf hotel complex but was not crowded and the restaurant was very good or maybe it was the monotony of boat food that made their meals taste so good ! We needed to provision so hired a driver to go to the Kepri shopping mall,about 45 minutes drive away , where there was  large Carrefour and we bought oil to service the engine from a garage on the way back. Jane was arriving the next day so we serviced the engine the next morning while a large rain squall passed by outside .Luckily all had cleared for jane’s arrival and we had a fine evening swim and a good meal in the restaurant. The next few days passed relaxing by the pool, reading and eating and  chatting . We had to fill up with diesel but decided to just get 110litres in jerry cans rather than go round to the fuel dock ,this would be quite enough to get the 15 nm to Singapore . 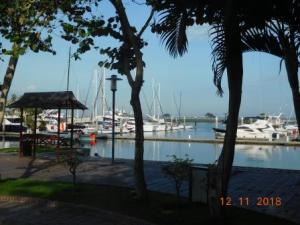 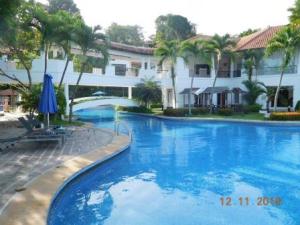 and the bar overlooking the pool