Posted on September 9, 2013 by yachtbaringo

We had a pleasantly uneventful sail from Aruba to Santa Marta, Colombia. The usual   downwind passage with a combination  of the  big jenny poled out ,twin headsails and the main alone  and occasionally the iron sail .We tried to arrange the speed for a dawn arrival and were just a couple of hours early .We waited outside the harbour and as dawn lit the sky a huge mountain range appeared towering over us .This is the highest coastal mountain range in the world a fact that did not surprise us when we read it later .We tied up in the Santa Marta marina in the morning light with luxurious alongside pontoons ..no stern to med.style mooring in Colombia so a good start .The marina is 2 years old and managed by IGY the same company who run the Rodney bay marina in St Lucia and where we heard about this one when we finished the ARC and decided it would be a good place to stop and explore Colombia .  Indeed it proved to be so.

We needed an agent for the formalities and luckily had been recommended one on the cruisers grape vine, so Dino arranged everything including  our bus tickets to Bucaramanga to start our land travels .We took this overnight bus which was very comfortable with reclining seats , cinematic and musical entertainment but rather fierce air conditioning requiring hats and rugs to stay warm .We arrived at dawn and caught another bus immediately to San Gil and  easily from there in another bus to Barichara through amazing mountain scenery. Barichara  is an old Spanish town in the hills quite unspoilt and with very few tourists .Our hotel was a beautiful old Spanish house with a courtyard overlooking the church .We walked to Guane along the camino real an ancient Indian stone path through scenery on a grand scale and had the path to ourselves apart from a few goats and cows.

We returned by Giron another traditional town near Bucaramanga and found the local fiesta in process so lots of music ,people and horses thronging the square providing us almost 24 hour entertainment.

Then is was back to Santa Marta to meet  Jeremy Vevers a medical school friend of John’s ,our next guest on the voyage .

We then set off for Cartagena this time by taxi arranged by Dino and we stayed in a boutique hotel in an old house which was very satisfactory in the centre of the old town. Again there was a beautiful courtyard but also  a rooftop pool so refreshing after a hot day sightseeing .The old city is full of history with so many naval battles, the heart of the South American slave trade  and the Spanish inquisition all happening here.The city walls are well preserved and we cycled around them as well as exploring the small streets of the old city.

another cartegena haircut for Jeremy

We returned by taxi again and in the process had a tour of Barranquilla a large seemingly wealthy commercial port city picking up extra passengers from different parts of the city.

Once back on board  it was on to the next trip to the Tayrona national park westward along the coast towards Venezuela but only about 45 minutes from Santa Marta. We stayed in a rather extraordinary hotel Borlaventa (windward in Spanish) perched over the sea. The rough sea was just separated by a sand bar from a flat lagoon where the river entered the sea making a rather bizarre contrast depending which way you looked .The noise of the breakers was continuous but  we could not swim in the sea because of currents and the sheer power of the breakers.  However,  the lagoon was a warm bath which  we shared  happily with many birds. We hiked in the national park and found some beaches where it was safe to swim after trekking through jungle and mangrove roots . It is  a truly dramatic coastline strewn with extraordinary rocks which fell into the sea millennia ago and are still there. 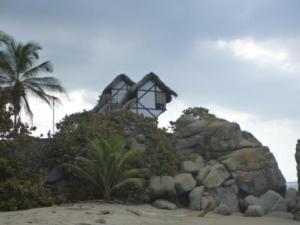 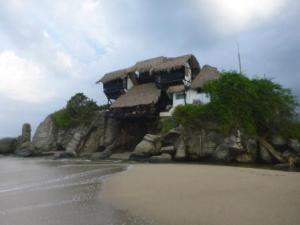 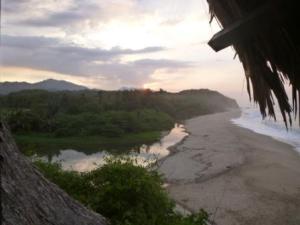 view from our room Barlovento 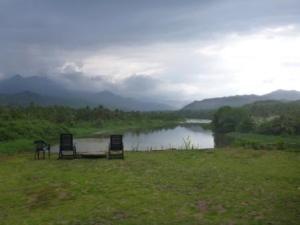 Lagoon at other side of Barlovento

Then back to the boat and preparations for departure once again done by Dino although we had to do the shopping! We tried to find a post office which is normally quite easy but not in Santa Marta we were first taken to the next door village by taxi but no post office there, then we walked around Santa Marta but despite the help of a maps and several directions from the locals the skippers usual remarkable navigations skills failed and we never found it! Time was passing and we had to give up to get away before dark.

We slipped the warps at 4.00 pm and headed into rather a dark and stormy sky towards the San Blas islands off the coast of Panama .