We were delayed leaving by strong winds over Wallis and storms over Fiji to greet us ! So we used the time and went on a tour of the old fort used by the Tongan rulers of Wallis arranged by the Wallis cultural  centre. It was  just for us  so proved  very pleasant and interesting .It reminded us a little of the marae in other parts of Polynesia and was made of volcanic stones and  covered a large area . We also went again to Lalolalo lake  such a lovely place and completely unspoiled . Our guide told us that after the war the Americans had pushed all their armaments and tanks into  the lake but some enterprising divers had scaled the vertical lake walls to search but only found guns .The tanks had been pushed into the western part of the lagoon . 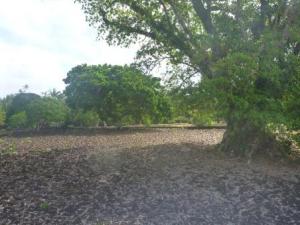 The 28th and 29th July was a festival in Wallis celebrating their change of status from a French Protectorate to a French overseas territory which took place in 1961 .This involved a big party with lots of music  dancing in front of the King .We enjoyed watching it and seeing all the decorated buildings . 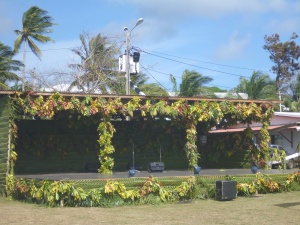 stage decorated with leaves for show.

dancers in front of king

We decided to try and leave on Friday 29th July but only go to Futuna about 150nm away and within the same territory but as Friday dawned the rain was heavy and visibility very poor and as we waited for it to clear the time to get through Honikulu pass came and went so we had to abandon departure  plans . We were advised then by Emmanuel our meteo  expert that Tuesday was the best day to go for a good journey and fine weather on arrival . By now we had the dinghy packed away which is quite a task as the new model is much larger with aluminium floor boards so has to be stowed below.  Having got this done we were reluctant to get it afloat again so we spent the next three days at anchor and said goodbye to the other two yachts anchored with us in the bay  .They were both going east so needed different weather . A squall hit us quite suddenly on the night they left , bringing  40 kts of wind with heavy rain but not for too long luckily . We hoped our departed neighbours had missed it .Then finally we had one calm day so we were able to swim at last .The only windless day  throughout all our time in Wallis and now it was time to go !

It was not a very early start as our exit time was decided by the tide in the Honikulu Pass which today was at a civilised 11.15 and we went through easily with only a 2kt push from the ebbing tide. Outside the sea was as flat as we had seen it outside a lagoon since we started this year and the wind a pleasant 15kts from the SE; we were reaching our way to Fiji. By 3.00am the next morning we had the usual 2 reefs in the main and jenny and were back to the heavy swell and the ceaseless rolling! We were sailing quite up wind so in addition we had more waves than usual over the cockpit but no rain despite a few black clouds. By the next night we decided on 2 hour watches as conditions were still hard and by this time we were heading straight for one of the many eastern islands of Fiji rather quickly. Emmanuel had forecast a change of wind direction in our favour and miraculously on cue the change arrived at about midnight and we were able to make course for the Nanuki passage through to the Koro Sea without altering the sails. It was a great relief. Once in the passage in the lee of some of the islands the sea calmed and we had a very pleasant day sailing across the Koro Sea  towards Savusavu bay . This took until dawn the next day, a perfect arrival time and we were greeted by a Copra Shed marina hand in his dinghy who tied us up to a mooring buoy at 07.30 Friday 5th August . This was truly a memorably smooth arrival at the marina in Nakama Creek ,Savusavu .