The dilemma leaving Samoa was not leaving on a Friday and not wasting a day but we did not manage to solve this one so wasted a day waiting in the harbour for Friday to pass. We had difficulty extricating Baringo from the marina because of an awkward cross wind and a large steel boat next to us, we had to do this at 5.00am when the wind was calm and then anchored in the harbour for until Saturday 16th July .We finally left at dawn and sailed north of Upolu and Savai’i slightly longer than going through the Apolima strait but it would be more sheltered and more scenic . We finally found a nice 15kt breeze so we had a pleasant sail in flat water until the eastern end of Savaii when it suddenly stopped ,we certainly had shelter now ! We continued under motor when the overheating alarm spoiled the tranquillity and found the fan belt broken . We were quite close to the shore drifting slowly towards it so there were a few anxious moments when we could not find the spare! Luckily this was short lived and John fitted the new fan belt easily and we were underway again . Once past the lee of Savai’i the usual 25 kts of wind and 2 meters of swell arrived so we sailed on into the sunset. The next day the rolling finally go the better of the oven which fell off its left had support and stopped gimballing. No more cooking now for the rest of the voyage but luckily it was not too many miles to Wallis but it was cold baked beans that night for supper. Our treat was a school of dolphins playing around the boat for a few hours the next morning but we were beginning to feel a little sceptical about the Friday rule!

We arrived at Wallis at 04.50 on Monday 18th July, rather too early to get through the Honikulu pass at the southern end. We needed low tide to do this safely so we dollied around outside the reef and much to our surprise another yacht appeared also wanting to get through the pass. We talked on the radio and reassuringly we both had the same information so we waited until 11.00, had a look at the pass and seeing flat water in we went. It is quite narrow and there are dramatic waves breaking on the reefs either side so as always it is nice to get through it safely. Once in the lagoon the sea was a beautiful iridescent turquoise blue  and only small waves . The path through the lagoon to the capital Matu Utu on the NE side is well buoyed so we anchored off the deserted port and stayed on board for the rest of the day tidying up the boat and sleeping .

Honikulu pass into Wallis; the breakers either side at the entrance are just visible from this distance but bigger close up! 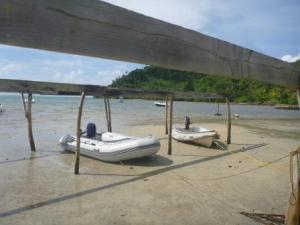 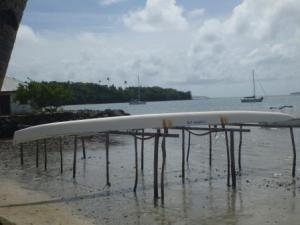 We had an interesting two days driving round  Uvea finding many unusual distinctively Wallisean churches and two crater lakes. The challenge was navigating without a single signpost , road sign or village name ! The churches are all huge and there do not seem to be that many people to fill them and some are fairly remote although the island is small and the Walliseans drive around  in Toyata  hiluxes or similar which all look very new so everywhere is actually accessible . Without any public transport it seems everyone has a vehicle. We walked along deserted jungle paths to the shore but unless the tide is high the drying reef precludes swimming . There are no resorts, beach hotels or sea side cafes here , in fact no concessions for visitors at all as there are none apart from a few yachties.  All the houses and gardens all well looked after and the vegetation is certainly lush . 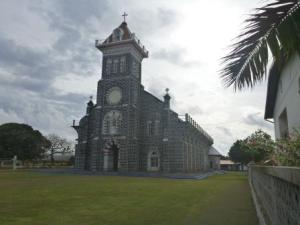 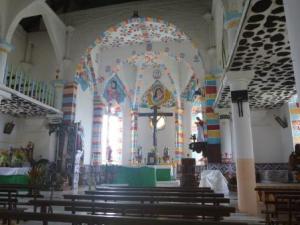 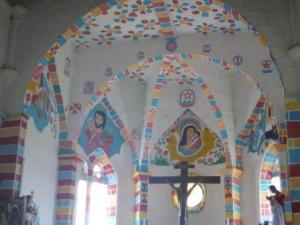 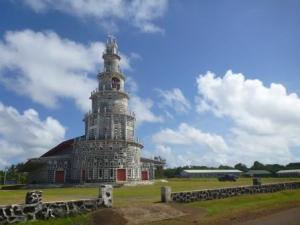 yet another massive church 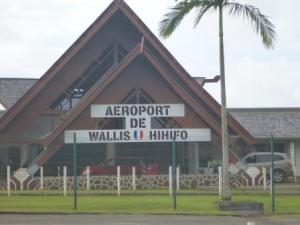 Interesting name for an airport; say Hihi or go Hi and then ..? 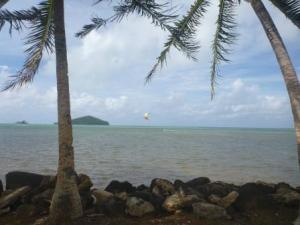 We returned the car so it is now walking  or hitch hiking to get around  and into  Matu Utu which is about 5 mils away from Gahi . We are waiting for a  chance to get to Fiji but at the moment the weather  does not look very promising .