We anchored off the island of Uligan at the northern tip of the Maldives for our stay here. The island is one of several making up a large atoll and is a potential tropical paradise with long unspoiled white sand palm fringed beaches and clear water with amazing colours from brilliant turquoise to deep blue. There are about 480 Maldivians living on the island and there is a school, a small clinic and three shops but no café or restaurant and because it is strictly Muslim there is no alcohol allowed on the island. Luckily this ban did not include anchored yachts so the Baringo cocktails continued uninterrupted!

There were about 30 yachts at anchor when we arrived and none were sure of their next plans because of the worry of pirate attacks and the anxiety level rose each day! Eventually groups of boats joined together and left to cross directly through the area of pirate attacks but we decided to wait with a few others remaining with the TTT convoy and take the northern route up the Indian coast to Karachi. The frequent meetings to discuss all these options whiled away too many hours which could have perhaps have been better spent if circumstances had been different. The islanders were all very friendly but shopping such as it was and the admin of arrival and departure all took time as the pace on the island is understandably very leisurely. We needed to refuel which we did using jerry cans and the dinghy and the same process for some water although I am pleased to report we are making (drinking) water now.

We swam every day off the boat, some sailors were excited by the appearance of large black manta rays but they looked very sinister in the water like big black rugs and when their fin surfaced it closely resembled a shark’s fin, so adding to their foreboding demeanor. We avoided them! Our local Maldivian help mate entertained us to supper in his home he was surrounded by women and children and of the later 8 were his own but we refrained from asking the number of the former! It was an interesting experience but for US$35 for spaghetti and rice slightly overpriced but we felt it was a contribution to the Island who are very hospitable to passing yachts. Long may this continue. We had the usual tasks to prepare the boat for the next voyage but the generator could not be repaired despite John’s best efforts and a lot of help from engineering sailors. The wind generator needs a new regulator so that will have to wait as well.

It is extraordinary where the time went as we only managed to snorkel once off the beach! Our group leader Rene finally arrived from Sri Lanka and the remaining boats of the group who had not already departed on the direct route or were not putting their yachts on large transport vessels to the Mediterranean left Uligan Saturday 12th Feb. on the Northbound route hugging the coast of India and hoping for the best. 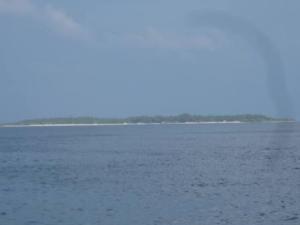