We left Hamilton Island still in quite a strong wind and decided to go back to Port of Airlie marina rather than anchor off and dinghy in ,the lazy option ! We had to collect a new Raymarine display dial as more were going black this year and it would be cheaper to provision here than on Hamilton Island.

We left the marina on 22nd July and headed north west towards Edgecombe Bay, we were trying to avoid overnight sailing if possible on this trip and indeed we had the time and there are plenty of anchorages.  We transited Gloucester Passage to gain the anchorage luckily at high tide as it was rather shallower than we had expected so luck was on our side again. It was a quiet night so the routine of cocktails in the cockpit followed by supper and a DVD was easily accomplished. The next day was a 40nm mile run to Cape Upstart a very high peninsula around the back of which we presumed would be a sheltered anchorage but we were wrong. We spent some time going up and down in search of a quiet spot but there were none, so we picked the best we could and had quite a noisy night with the wind blowing and the waves slapping. Once we left the next morning to our surprise we found ourselves in the wind shadow of this high cape for quite a long time although it had eluded us at anchor!

The wind was quite strong about 25knots and the swell picked up but downwind it was manageable with jib alone and we made good progress to the next stop Cape Bowling Green. This was a complete geographical contrast to Cape upstart as it was long cape of very flat land so we did not expect much shelter from the wind but hoped for calmer waters behind the cape.  Our expectation was not realised and as we went further and further into Bowling Green Bay the  wind and waves remained unabated. As usual the  water was shallow and even when we reached a possible anchorage well into the bay we seemed to be in the middle of nowhere as the land around was so low it was almost invisible. So with no prospect of shelter we decided to continue to Magnetic Island just off the coast of Townsville to seek a calmer anchorage. We made good speed and it was a moonlit night so we arrived to the welcome peace of Horseshoe Bay on the north side of the island at 21.30. There were about twenty other boats there in the recommended SE corner but enough space for all. After dodging an unlit boat we anchored and had a quiet night.

Townsville view from Castle hill with magnetic island in the distance.

After a quiet day at anchor in Horseshoe Bay we needed to go to Townsville marina to get the new Raytheon display unit fitted and operational and we had also noticed our AIS ( automatic identification system ) was not working, we could see other boats but they could not see us. We had confirmed our suspicions by asking a commercial vessel to check if they could see us and they could not. Luckily Townsville seemed to have all marine services available and The Breakwater Marina there was very pleasant and we had both problems fixed in one day .Interestingly the problem with the AIS was corrosion of the wires at the stern carrying the GPS signal!  Despite being protected by plastic coating their position at the stern of the boat in the destructive marine environment had been too much for them over the last eighteen years.  We took advantage of our time there to drive around Townsville and go up Castle hill which overlooks city and almost divides it into two. We had a splendid view over the sea towards Magnetic Island.

We returned to Magnetic island the following day and enjoyed a few days there hiking and swimming and even stand up paddle boarding. It was warm sunny weather and we used the solar panel charging device that Henry had given us to charge our phoned and i-pads with great success. This could prove very useful in the event of electrical failure as we would still be able to charge the i-pad for navigation. So we immediately felt more secure!

There is an old Second World War fort on the island built to look out for the Japanese coming by sea, in fact they never did, but the old buildings and gun posts have been preserved and are interesting to look at and realise the difficult conditions the soldiers had to work in there. We saw two wild koala bears on this walk as there are a large number of wild bears in this particular area.

It is never long before another problem arrives on a boat and this time it was the generator that stopped. We spent a beautiful sunny day diagnosing the problem ourselves and finally discovered it was the sea water flow sensor, again very badly corroded .John removed it and the generator worked perfectly but clearly this was not safe in the long term so it was back to Breakwater Marina on 4th July for the Cummins expert to help out. In addition to the corroded sensor corrosion had attacked  several important wires which needed  to be replaced as well as the flow sensor . We found ourselves significantly poorer the next day but we did have a working generator.  Repairs are expensive in Australia but they are done well and professionally.

We left from the Townsville Marina on 6th July and continued north for the final push to Cairns. There was no wind so we had to motor to Juno bay Fantome Island in the Palm island group which was  beautiful and a perfect anchorage in the non- existent wind but would have been a different story in an established SE trade .

We had planned  to navigate the Hitchinbrook narrows a channel between the dramatic Hitchinbrook island and the main land but in order to enter we had  to cross a sandbar in Lucinda the small town at the southern end of the narrows .As previously mentioned we had  been moving up the coast under the watchful eye of the Volunteer Marine Reserve contacting them daily with our progress and sailing intentions. This morning before entering the narrows which we knew we could only do on a rising tide we were warned by the VMR against attempting to cross the moving sandbar. Of course it is all on the  charts but as the bar moves every year they could not possibly be accurate so we sailed up the sea side of Hitchinbrook island which was  disappointing but at least safe and  the mountains were certainly dramatic on this the second windless day. We had intended to anchor at the northern end of the narrows anyway and as the strong SE winds were returning, they don’t stay away for long, we found a well sheltered anchorage just off Hecate point and stayed for the next  day as well as there was a strong wind warning. The weather forecast in Australia is very accurate and broadcast twice daily on the VHF radio by each VMR station along the coast which is very reassuring.

We sailed off again on 9th July to our next chosen spot Mourilyan harbour another small sugar port with a very narrow entrance flanked on each side by two peaks Hilda and George. Although the peaks are easily seen the narrow entrance is invisible until you are opposite it. There were several boats at anchor and as usual the water was very shallow and in addition there were many mooring buoys which we had to avoid. So finding a suitable spot was even more difficult than usual but we did but only after one unsuccessful attempt. The tide was strong and the wind weak inside the harbour so predicting the final resting place of the boat which would sit  mainly to the tide is not very easy. We ended up rather too close to a couple of other boats but hoping we would all swing in unison with the tide we stayed put and all was well.

We now had only one more stop before Cairns and we had a good sail under jib alone down wind and made good progress towards Fitzroy Island a popular tourist island near Cairns.  It was a sunny day but on arrival at Fitzroy it did not seem that sheltered and there were several yachts already anchored there so we took the second anchorage choice in Mission bay a little further around the coast. The wind was blowing strongly but we had at least lost the swell on rounding the cape but as usual it was difficult for us to get far enough in because of the depth to really get shelter from the wind. We were obviously getting braver as we left only 0.7m under the keel at low tide .

The next morning it was round to Bluewater Marina which again we had to enter in as high a tide as possible to get up a mangrove creek. We had the usual friendly Australian welcome with someone to help with the lines and we were once again safely tied up. We set to work packing the boat up for the six weeks stay there and luckily had a couple of days spare to explore Cairns and the Atherton tablelands.

Another view of Cairns waterfront 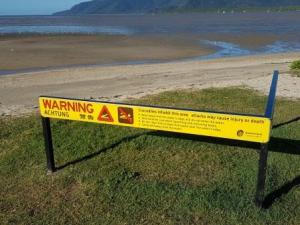 Crocodile Warning on the waterfront!

Descending from the Atherton table land 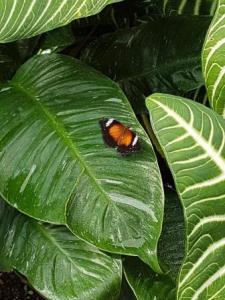 We left on 16th July hoping to return for the final leg to Singapore in mid-September.

Apologies for the paucity of photographs but we lost our camera in Magnetic island.