Posted on September 24, 2017 by yachtbaringo

Baringo’s sailing this year has been rather curtailed because of family commitments but we were eventually ready to leave the Bundaberg port marina for the sea on 27th August. We had to stay longer in the marina than planned because of a fracture in the intermediate shrouds which had to be repaired before we could leave .Our plan was to cross Hervey Bay and explore the west coast of Fraser Island which is the largest sand island in the world and sail as far South as we could into the Great Sandy Strait. At this time of the year the Antarctic humpback whales visit Hervey bay to breed and rear their young in the warm waters so this was an exciting treat to anticipate. The first night out we anchored nearby in the Burnett River to make sure the anchoring and other systems were operational before we finally left the security blanket of the marina to which we had become accustomed despite looking forward to being on the open sea again.

The next day we had a very early start to reach the northern tip of Fraser Island, Rooney Point .We had a very easy and enjoyable sail east across Hervey Bay a distance  about 40 nm so with  20 kts of wind from SSE on the beam we arrived in good time in daylight.  We had our first whale sighting on the way across and we always had to keep a good lookout as hitting one accidentally would be painful for both parties.  We encountered our first problem en route … the larger port winch had jammed in one direction! This came as a great disappointment as well as an annoyance because we had meticulously serviced all the winches every year since we left Hong Kong and this was a first  for us. Luckily there is another one on the port side to use so we could continue.

Platypus bay extends along the west coast of Fraser Island from Rooney Point as far as Inskip point and is essentially one long beautiful wide sandy beach and anchoring is possible anywhere along its length. The sea was far too cold for swimming and sharks are about so no real temptation for us although with the sunshine and clear water it often looked inviting.  Anchoring is possible anywhere  along the length of  Platypus Bay so after a  peaceful first night at anchor we dismantled the winch curious to find the problem. This proved to be two metal gear components totally stuck and we could not undo them, but we could not work out why so there was nothing we could do except hope none of the other winches developed the same problem. We plan to find out more from Lewmar later. 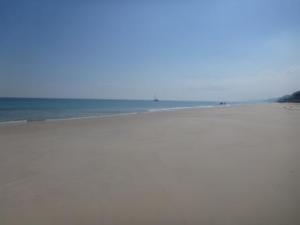 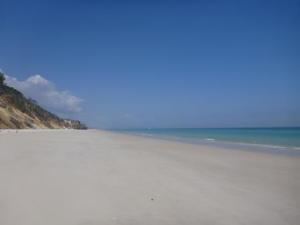 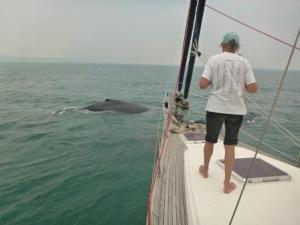 Whales swimming around the boat

The next day the wind forced us to move further down Platypus bay to get more shelter in the so called Lagoon Anchorage. Again we were anchored off an endless empty sandy beach ,no  chance for us to enter the lagoon with a 2m draft , but the sea was calm and  we could hear the whales singing at night and they often paid a visit to us during  the day. They are an amazing sight. We continued to make our way south slowly enjoying walking on the deserted  beach  every day but  were surprised one morning when a small sea plane landed just by Baringo! The pilot anchored the aeroplane swam, sunbathed and then took off ! 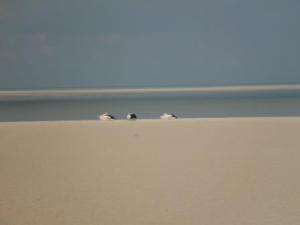 Sleeping pelicans on the beach 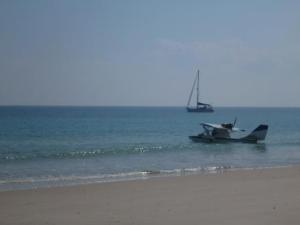 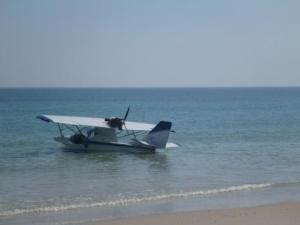 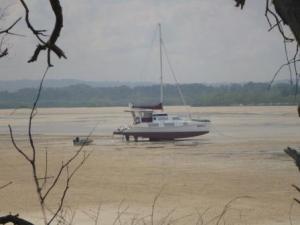 Catamaran on dried out lagoon.

The southern end of Hervey Bay narrows into the Great Sandy Strait and with this narrowing the tides become rather important as the water flows so much faster through the Strait often producing 2-3 knots against (or for ) .So we waited for a fair tide before entering the strait and as there was a northerly wind that day blowing directly down the strait we had to find a protected anchorage which was rather further south than our original plan but luckily north of the (in)famous  Boonlye Point  which is only passable at high tide for any boat with a respectable keel! There were several other yachts there presumably waiting to get across with the following morning’s high tide. Luckily the timing was comfortable a 07.30 departure and we were lucky to follow another yacht through the  channel and our least depth below the keel was 0.8 so we were glad when we arrived in deeper water . The wind was northerly again and our planned anchorage, Garry’s Anchorage, was full so we  continued but none of the other anchorages we had  considered were sheltered in the strong northerly wind so we finished as far south as we could go in Tin Can Inlet. We passed the exit from Great Sandy Strait to the open sea across the Wide bay bar and it looked quite unpleasant reminiscent of a washing machine and no boats were crossing that day. Luckily the southern end of Tin Can Inlet is just one large anchoring area with many and varied boats but plenty of space and  a flat sea despite the persistent strong northerly wind .

The next day all was calm and serene in what looked like a different place now at high tide as lots of land had disappeared! As usual we had another problem to deal with …a non-functioning engine room fan. After investigation it only proved to be a corroded connection so repair and replacement was easy. We explored the upper reaches of Snapper Creek, one of several leading off Tin Can Inlet , but as the outboard was not functioning quite as normal we had  to time our trips with the tide and  only go in light winds which meant morning outings as the wind usually picked up during the afternoons. Luckily this enabled us to have a sumptuous Australian breakfast one morning in the local Barnacle café. We stayed for three very relaxing nights and then left on 8th September on the return journey. 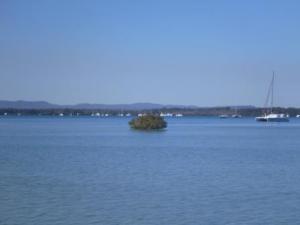 The weather was very calm and as we passed the entry into Wide bay bar it looked flat and blue with lots of yachts heading to the sea, quite a different picture this time. Our first stop on the way back was Garry’s Anchorage which we had missed on the way south, but it was now almost deserted so no problem finding a spot There was a pleasant walk ashore through the Fraser Island forest so after reading all the cautionary tales about dangerous creatures before we started  we were treated to a Dingo sighting! We had been advised by another yacht that we should always carry a dingo stick but the dingo seemed more curious than threatening and followed us back to the dinghy . 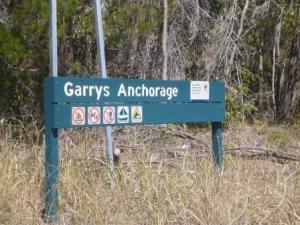 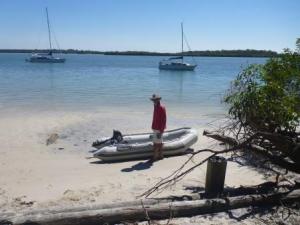 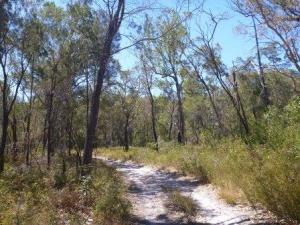 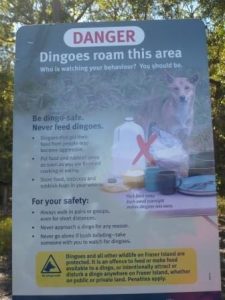 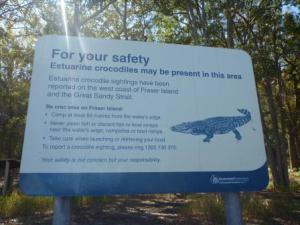 The next day we had to transit Boonlye Point again so after studying all the tidal information we could get not all of which was concurred we made a plan to cross. Sadly this unravelled and rather than take it on a falling tide we anchored until the next day just south of the shallow transit! Luckily the Great Sandy Strait is what is says with sandy flats and shallow water for anchoring almost anywhere! The next day  we went through, again 0.8 m the lowest depth under the keel and happy to escape mishap .We had booked a berth in Urangan Marina for two nights as we needed to provision again and get  wi-fi   as the I-pad our back up navigation aid had stopped working. We achieved the necessary ashore  but the weather forecast for our departure day was very strong northerly winds (again ) but there was no space for us to stay in the marina so we had to find an anchorage to shelter for the next couple of days and nights. Apparently this winter has produced rather more than average northerly winds. We decided on Susan River estuary further south so the wrong direction for our return to Bundaberg but no choice about that and the wind picked up on cue as we approached the estuary, but again the sea was calm once we rounded the headland into the Susan River. Several other yachts had had the same idea but we found a sheltered spot and waited out the north wind on board for the next 24 hours . We knew the wind was changing  to south west which would put us firmly on a lee shore so we were prepared to leave when it changed and the weather forecasting so far had been very accurate timing the changes of wind direction . But it did come  rather suddenly and having let out another 120m of anchor the previous day we swung perilously close to land which was at low tide much closer than when we had arrived at low tide ! We managed a quick get away and although it looked pretty rough outside in fact it was not really difficult and we made our way speedily north with the wind behind us . 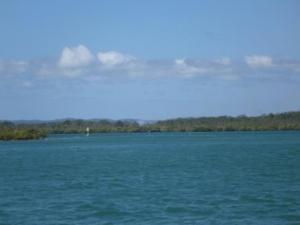 We now had to find another anchorage before returning to Bundaberg this time sheltered from the southerly wind ! We chose Woody Island and again had lots of company .It proved again good holding and as dusk fell the sell thankfully eased and we had a good ret before the dawn start to Bundaberg the next day. It was a great sail across Hervey Bay about 40 nm with the wind changing to north easterly that afternoon and calming but we still managed to sail all the way to the “runway “entry to the Burnett River ,a line of port and starboard simultaneously flashing navigation lights . We anchored in the river before going into the marina the next day and onto the hard on Tuesday 19th September. So it was au revoir Baringo until next year.