Postponement in Polynesia May 28- June 10.

So very easy to do ….always an excuse to stay within the calm and safety of the lagoons , but the work continued.
While waiting for the rigging repairs to be done we practiced managing the new oversized dinghy and the new possibly underpowered 2.5 suzuki 4 stroke but I am glad to say practice makes perfect and with the Gibson lift we are now much more adept at launching and raising it .This has to be done every night as dinghy theft is common and would be a cruising catastrophe. The outboard is quite adequate for our needs which do not include winning the round Raiatea dinghy race.
We decided to venture to the island of Taaha over the weekend, still within the Raiatea lagoon but we hoisted the new main sail on the way and it looked very glossy and clean with a much improved sail shape . We stayed for the weekend in Haamane Bay, Taaha which we knew very well from last year and is very beautiful and tranquil. There is an excellent restaurant with equally excellent internet and two reasonably stocked supermarkets including fresh daily baguettes . We serviced all the winches while there, a very satisfying job and enjoyed a delicious dinner in the Tahaa Matai.

We then sailed around the north coast of Taaha to try out the foresails ,although 6 years old now they looked good so we hope they will be up to the passage . On Monday we planned to go to Uturoa the main city on Raiatea to provision and refuel before returning to the boatyard for the rigging repairs . As so often happens plans changed en route because a strong easterly wind was blowing making docking in the small easterly facing port of Uturoa rather tricky. We had been blown onto the dock last year during similar conditions so with discretion being the better part we went directly back to the moorings outside the boat yard and decided to refuel in Bora Bora by dinghy now we had one up to the job ! We took a taxi to the supermarket and came back with more food than we would need but overprovisioning is a good policy I think.
The 1st June was the day for the rigging so we went into the small basin in the yard but Fred the rigger had other ideas and postponed until the next day. Once in the basin which has a difficult entry between two reefs we had to stay. All went well with the rigging repairs the next day although the test will be the ocean winds and waves so we will reserve judgement for the moment.

Rainbow in Raiatea near Carenage

By Saturday 4th June we were ready for the short passage 26nm to Bora Bora which started with light winds, motor sailing and water making . Finally we sailed half the way on the big jenny alone so very pleasant. 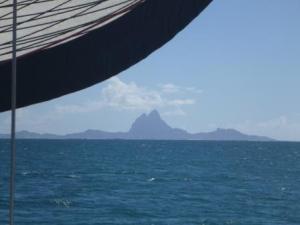 We returned to the Bora Bora yacht club and were happy to find it unchanged and many staff we knew still there, this is our fourth visit. The weather has been very mixed since we arrived here because of a large system passing to the south which produced westerly and southerly winds here so quite boisterous in the YC bay which is sheltered from the usual prevailing easterlies! We have had several squalls with up to 35 kts but so far the mooring has held us in position. 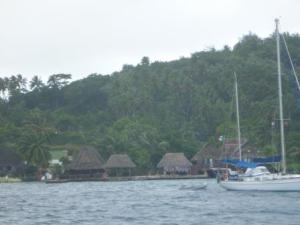 We took advantage of the dry and less windy periods to provision (again ) start our exit procedures , John started rigging the boat with a new style preventer from the bow and manageable from the cockpit .We successfully transported several jerry cans of diesel in the dinghy which would not have been possible in the now departed Avon . We watched the weather which did not seem conducive to our route west, so our departure date was postponed several times and we are still here waiting .Rather frustrating but because of this delay we had to use the water maker again and after a few minutes of operation it stopped ! Just as we were thinking the list of jobs was ending another rather major one appeared . It seemed the pump had given up , we had a replacement which John masterfully fitted but it was a days work and so much easier in the Bora Bora lagoon than mid Pacific ocean. The additional bonus is that we are now producing much more water than before. Every cloud …….etc
The weather seems set fair for our departure on Monday 13th as the system has passed to the east, and the swell is settling from 3 meters from the south to 2 meters from the east , so lets hope we can manage to drag ourselves away from Polynesia which will be quite a wrench, we have had a wonderful time here and it is a real sailing paradise. I think we prefer au revoir rather than goodbye!

piroques race passing us by.

1 Response to Postponement in Polynesia May 28- June 10.