Posted on October 2, 2015 by yachtbaringo

The journey from Fakarava to Papeete was again with a force 6 touching 7 wind and the accompanying rough sea which has been our lot this year. We had just finished supper on the second night when the autohelm suddenly switched off and as neither of us were at the helm the boat turned quickly downwind rather surprisingly and we had jibed before we realised what was going on. We had quite a shock with the bang but luckily we had a double reefed main and the mast remained in an upright position and on later inspection no damage had been done. We reached Tahiti at dawn with a spectacular view of Moorea which has a particularly dramatic silhouette but often invisible due to cloud cover. We went to the Marina Taina just south of Papeete rather than the main in town marina which as our crew from last year will remember well is right by the main road and quite noisy. The pontoons are all brand new now and a great improvement but still close to the road. We initially stayed on a buoy near the marina to tidy up and get ready for the arrival of Antony and Vanessa. 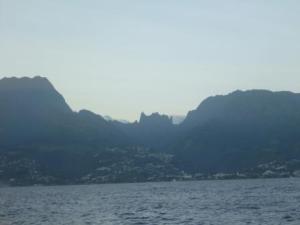 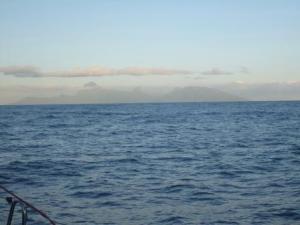 We went into the Marina proper after a couple of days still in a strong wind so needed help to get tied up but we were badly positioned at the end of a pontoon with the wind blowing us onto the adjacent boat causing anxiety to the owners and to us. We had to have an extra mooring line rigged to a submarine concrete block which had to be attached  by a diver and this worked well until the wind changed direction after a couple of days and we were pulled half off the end of the pontoon ! Hardly an ideal spot and not what we had wanted for our arriving guests .In addition, being stern to rather than alongside we all had to walk a narrow uphill plank to get on and off the boat …tricky after a few Hinanos ! The final coup was a 30 euro charge for electricity for a 4 days stay so we will not be going back! Vanessa and Antony arrived at 05.15 on 30th August and after welcome of walking the plank and breakfast we had a drive around the north of Tahiti to see Venus point where Captain Cook tried to time the passage of the planet across the earth to determine the distance of the earth from the sun ( he failed ) . The weather was changeable and the beaches black sand but Tahiti is certainly not the high spot of the Society Islands so better things were to come. We then started a slightly curtailed version of what is fondly known as the Davies Society island Cruise and left for Moorea the next day in strong winds but with beautiful views of Moorea .We anchored in “internet alley “ at the head of Oponhua Bay which Simon and Jo will remember and dined overlooking the sharks again at the crepes restaurant in the nearby Hilton and enjoyed the lively Polynesian music and dancing there the following evening. 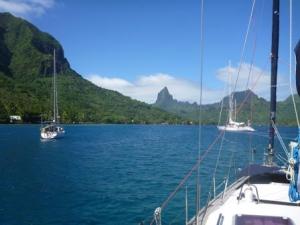 Next was the overnight sail to Huahine which started off in the usual way with force 6 which gradually calmed by the morning but not in time for us to be able make the pass under sail and as we did not want to miss the island altogether the motor took us the last few miles. We found a mooring buoy outside the main town of Fare, there were fewer boats here than on our pit stop en route to Tikihau. The water was too clear and the beach too close for our guests to resist so the days entertainment was an easy choice .We stayed and provisioned then the next day we went south through the lagoon to Avea where the water and the snorkelling are first class with an easily accessible coral reef just off the beach.

Time pressed on and we had to leave for Raiatea, Vanessa and Antony were with us for only two weeks so no time to dally sadly .This day sail was pleasant and we had full sail up for a short while a first for this season! With only a one night stop here we chose the spectacular coral garden to visit .This is a narrow shallow channel between two motus ( coral islands )but full of fish of all colours and shapes .There is no need to swim as it is shallow enough to walk through but it is pleasant to float back with the current amongst the fish. Just after the snorkelling trip a big squall blew through so we had to wait to leave for Bora Bora. We had thought this would be a pleasant downwind sail so we spent the rest of the morning rigging the pole for the jenny only to find from the GRIB file on the weather when we checked the latest forecast that all had changed and we were to be upwind ! So it was all change again .It was a grey and wet crossing but we arrived at the welcoming Bora Bora yacht club in time for a delicious supper. 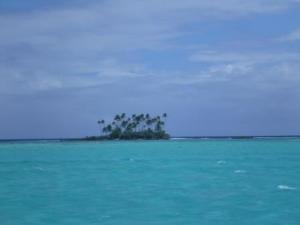 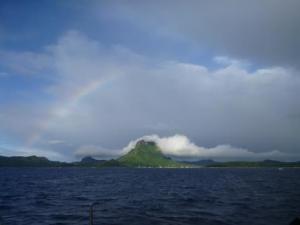 Henry arrived in Bora Bora the next morning in glorious sunshine and we took the airport catamaran to meet him, there is no land access to the airport as it is on a motu on the north side of the reef   . Meanwhile Vanessa and Antony rented a jeep to explore Bora Bora by land . Once all aboard again we moved the boat further south near to Matira Point and we celebrated Henry’s arrival with an excellent dinner at Bloody Marys that famous Bora Bora restaurant some of you will remember . We moved further out the next day to try and see rays but it became quite stormy night so we were unable to dinghy over to dine at the Japanese restaurant we had discovered last year quite by chance with Simon and Jo. We enjoyed an evening on board while the wind raged outside and we played card games .We have had excellent holding with the now not so new Rocna anchor which seems to have proved its worth and to be highly recommended for any sailors who have not already got one .

Antony and Vanessa had booked into a hotel on the large motu on the east of Bora Bora for their last few nights so despite the bad weather continuing the next day we motored round the lagoon which is quite tricky as the water gets very shallow (3.0m) and there is a tortuous path to follow through the reefs. It is well marked but requires some concentration and is best done in bright sunlight and light wind neither of which did we have that day ! We tried to get close to the hotel to minimise the dinghy ride but even though there was no reef directly in front if was too shallow and we touched the bottom in our attempt, always a fright but only sand so no damage done .We anchored further south and then there was the dinghy ride with Vanessa and Antony and bags to the hotel but our sturdy little Avon and tiny outboard made it in John’s skilful hands despite a 30kt blow .

We then found that it was easier to take a shorter dinghy ride to the shore and walk round along the beach to the Hotel Eden which was very pleasant in a perfect location and accommodation was in small bungalows but very tastefully decorated with shells and coral blending perfectly with the beautiful environment … No hint of any glass or chrome! We could use the kayaks from the hotel and had a delicious lunch washed down with cold Hinanos . Antony and Vanessa’s holiday came to an end but Henry was with us for a few more days so we stayed two more nights here as we wanted to find the rays that we had seen last year. We were successful and indeed there were many more they are such an eerie sight silently and slowly flapping their way through the water like outsize underwater birds. The next day we visited another coral garden, it was a beautiful sunny day so the water was brilliantly clear and there were lots of fish. 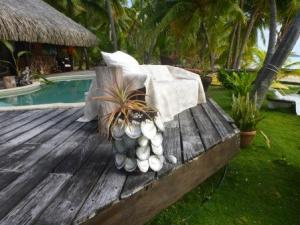 We then headed back through the same circuitous route, there is no other, and anchored off Motu Topua on the west side of Bora Bora for the night before returning to the yacht club. We wanted to show Henry the island by land before he left and we had a nice day out although it does not take long to drive around the island, it is very small but by land there is a different perspective . We finished with cocktails at the Sofitel and supper by the sea at the Maitai Hotel . The next day was Henry’s last but we snatched a quick early morning swim from Matira beach as we still had the car,such a beautiful long stretch of golden coral sand with clear brilliant turquoise water so a fitting end for Henry ‘s short holiday .Later that day we all flew to Papeete and we saw Henry off on rather a long journey to London and we returned to the boat the next day . The short interisland flight gave a wonderful view of the geography of the islands .

We now have a month left here before our trip to Peru and Bolivia .