Posted on September 8, 2014 by yachtbaringo

We left the north coast of Hiva Oa at 3.00 am with the moon just rising always a welcome sight for a night sail .We wanted to arrive in Ua Pou in daylight, this is an island to the north about 65 nm away. We had a good sail and a few hours after dawn Malcolm caught a huge dorado. So it was sashimi (with wasabi ) and cerviche for lunch followed by fresh pan fried dorado for supper ….truly mouth watering .

We anchored in Hakahau bay on the north east coast having sailed past the most unusual spiky outline of the island in clear blue skies . The island contours are created by basalt rock peaks around which erosion has occurred leaving the giant pinnacles behind soaring into the air,a truly extraordinary sight.

Hakahau bay has the main island town and as usual for the Marquesas it was clean and neat with well kept houses and gardens  and surprisingly well stocked supermarkets , although sadly there is a lack of drinkable French wines. 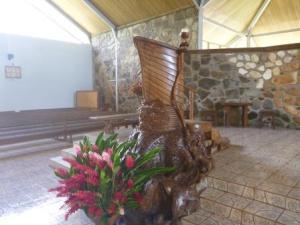 wood carving and stone work Hakahau. The churches were all very pretty and well looked after.

The trees were laden with the usual selection of fruit and we were given lots of mango and grapefruit by the locals just plucked from the trees in their gardens and all delicious . We recovered from the 3.00am start and the following day walked to a beautiful sandy beach about 30 minutes to the west over the headland ,another idyllic scene and as usual we had it to ourselves .

We all needed more exercise so we decided to do a longer 3 hour walk to shark beach only occasionally frequented by sharks and safe for swimming. It was a hot day and a shadeless road so after about an hour a hilux truck stopped to give us a lift in the back which was bumpy as the concrete had disappeared but welcome in the heat .We saw the small airport with the runway pointing directly from the sea to the mountains ,only one way in and out here. There was also a slope to compensate for the short length . Again we found beautiful beach with turquoise clear water and just as Glynis was entering for a swim she saw about 8 sharks swimming about 2 metres off the beach in the shallow water so she made a hasty retreat ! The bay lived up to its name but later they moved away so we all swam safely. 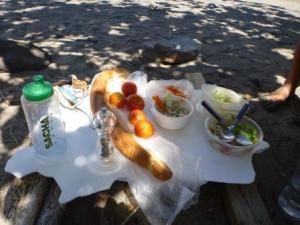 We had a delicious picnic and then walked all the way back about 2 hours so plenty of exercise. We sampled the local cuisine that evening in a delightful pension on the hillside looking over the bay owned by a Frenchman .We had sashimi, goat and bread fruit all local dishes and delicious . Jerome the owner is a retired military man as are many of the French living there .

The next day we moved to another bay Hakahetau to the west , another beautiful anchorage and all to ourselves.

The basalt cones towered overhead and the red roof of the church could be seen through the trees . We had a rather rolly night so moved anchor in the morning with a good result .We explored the village and walked to a nearby waterfall with a refreshing bathing pool at the bottom .We also met our driver from the previous day and he invited us home and sold us some fruit and then he came to visit Baringo . He was keen to crew but we had no space and he was the main carer for his mother and extended family so only a dream at the moment . We had a much quieter night and left early the next day just before the rain came over the island . 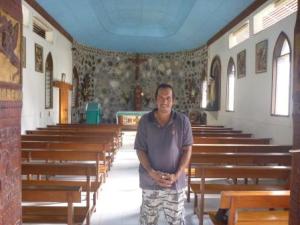 This is the largest island of the group in fact the second largest in French Polynesia after Tahiti .We arrived around miday after rather a rough sail across again going north west but we had 30 + kts and a big sea .We only had the small jenny, we had not been able to hoist the big jenny as we had not had enough shelter in the previous anchorages. However with this strength of wind we did not need it ! We anchored in baie Taiohae in front of the capital city.  There were several other yachts there some of whom we had met before but it is a large bay so plenty of room for everyone.

Taiohae bay Nuku Hiva- Baringo, a speck on the left

There was a small restaurant on the harbour front with the best internet yet and a yacht services centre for laundry and gas refills and any other assistance.  We hired another hilux for two days and had great fun driving the island roads through the valleys and mountains and remote villages . 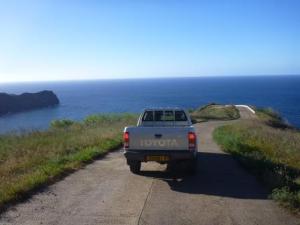 north coast road with the hilux

The north of the island is very dry” terre deserte “and the center is a plateau covered with pine forest. There are many beautiful bays and majestic mountain scenery. We visited the archheological sites and again we were the only visitors . 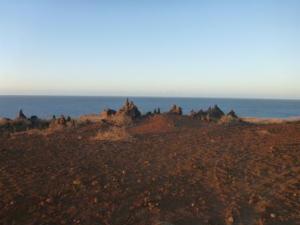 Hatiheu beach- another empty beach on the north coast

We did a short hike in the mountains the next day but as signposting is minimalist here we managed to find a suitable trail although it may not have been the one we were lookimg for but had a series of perfect vistas with horses along the way as well.

Later we provisioned for the forthcoming voyage to the Tuamotos where there is very little of anything but coconuts and had an excellent meal in the capitals up market hotel overlooking the bay .

The next day we moved to what was billed as the most sheltered anchorage in the Marquesas to put up the big jenny. It was about an hour away along the south coast to the west and we hoisted the sail easily after John had retrieved the halyard from the top of the mast. We had a last swim then reluctantly left for the Tuamotos .

Certainly the Marquesas lived up to all our expectations and beyond . Thankfully they are remote and therefore relatively under-visited but with just t the right amount of infrastructure to avoid difficulties and have a pleasant cruise. The Marquesans are friendly and easy going but not over interested in their visitors so no pestering . The villages and towns are very well maintained each with its own small church with beautiful stone work and local woodcarvings . It was a wonderful sojourn there, as we all agreed .