We left Hong Kong on 30th May after teaching the medical students at Chinese university since mid- January. It was a good opportunity to learn about living on land again and catching up with friends and not least refreshing the medical memory. A two week change over in  Chamonix which included driving from east to west across France to have the auto helm serviced as ‘Poppy’ had been working tirelessly and efficiently since we bought Baringo. She was returned with new hydraulic fluid and after a good clean. We had a short visit to the UK and our special treat was Glyndebourne  so a big thankyou to Janet, Dale and Kate for that.

After that short interlude it was back to La Libertad, Ecuador to find Baringo still in the same place with the same backward tilt she needed to fit into the travel hoist on leaving the water in November. Apart from some dust she was in good condition as the climate here is dry and warm with low humidity. The next day we were off to the Galapagos by air as we had decided the bureaucracy of taking the boat was too complicated and the risk of being turned away on a small technicality was too big to take so we met Malcom and Glynis on the aeroplane from Quito and on we flew to the Galapagos about 600miles west of Ecuador mainland .

The voyage inYate Frigate with 12 other travellers/revellers  started  at Isla Santa Cruz with a trip to the beach. We had a very knowledgeable and friendly naturalist Myra with us, I think the only female naturalist working on the islands. In addition there was a very humorous sailing crew who metamorphosed into domestic crew when needed and manned the bar with generous quantities of Argentinian wine and cold beer. We travelled through the eastern islands over the next few days ,they  are the oldest in the group ,but first it was Genovese which is the northern most island and north of the equator. Our days started around 6.00 am with a walk then breakfast and the snorkelling .Often there was a short “navigation “ lunch and another walk and snorkel. We had a briefing for the following day each evening with cocktails then supper. We often navigated the longer distances between islands during the evening arriving at the next day’s destination in good time for the near dawn start. All the creatures and birds were tame so it was easy to get close and watch them dance, court, take care of their eggs and chicks and generally carry on their daily lives and social (and often sexual) intercourse!

We stopped for two of the seven nights at the only two sizable town on the islands, Puerto Baquerizo Moreno on Isla San Cristobal and Puerto Ayora on Isla Santa Cruz neither were as rewarding as the deserted areas but a chance to buy some mementos of the trip.

We returned to the mainland on 27th June and found Baringo as we had left her  so it was straight into the tasks of getting her ready for her entry into the sea. Now we were 4 so it all happened quickly and in she went on Monday 30th without a hitch or a leak. We are planning a short “shake down” cruise of about 120nm north  to Bahia de Caraquez and will leave  early tomorrow morning tuesday july 1st .We can then  catch the early morning tide on arrival at Bahia   to get up the river to the Puerto Amistad yacht club.

We hope you enjoy the photos below ! 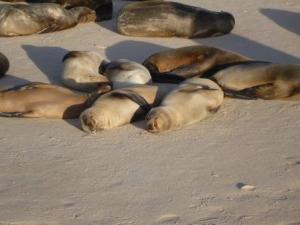 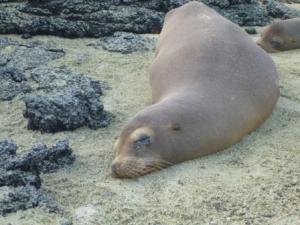 next stage of courtship! 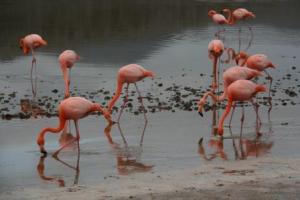 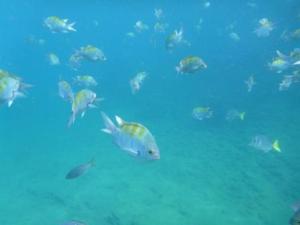 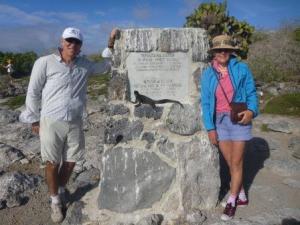