We crossed the border between Sudan and Egypt during a night sail keeping well offshore as the border is disputed.Our first port of call was Port Ghalib a rather soulless large holiday resort in the middle of the desert. There are apartments, hotels shops and restaurants and most importantly the internet. All the check in formalities for Egypt were completed in one office with the minimum of hassle which was very welcome.The marina is mainly for dive boats and only about three yachts were there but we made the most of the facilities swimming and gym and the hotel laundry.
We planned to go direct to Suez from there and left on 31st April but the wind became very strong during the night and the waves ever larger. They are very short and steep in the Red Sea so the boat was slamming rather frighteningly and we were only able to make 3 kts over the ground so we decided to go into Hurghada the next day for a rest and wait for better conditions. It seems the wind forecast is always about 10 kts less than reality.
There is a smart marina in Hurghada with a corniche lined with restaurants, bars and shops but the adjacent town is decidedly scruffier than the marina .It is a sprawling city and seems to be rather randomly laid out. It is a popular dive resort and there are huge numbers of dive boats which mark out the reefs during the day which is helpful. On our planned departure date 3.5.2011 we awake to strong wind and sandstorm! There is no choice but to wait even though we have checked out the previous evening but luckily the authorities understand. By mid day the wind is only 15kts so we leave and head up the straits of Gubal towards the Gulf of Suez ..It is the end of the Red sea for us.
There are many anchorages on both sides of the Gulf of Suez and after our recent experiences of night sailing when the wind always seems to pick up we decide to anchor each night on the way to Port Suez.The anchorages are variable and we stayed on the west side for the first two nights. The first anchorage Endeavour Harbour was very scenic with desert meeting the sea but the next stop was less attractive we were near an oil rig of which there are many in the Gulf of Suez. The following morning we crossed the shipping channel and and suddenly there seemed to be lots of large vessels in the way. Of course they are still relatively close coming south as they all enter and therefore leave the Suez canal in convoy.
We head ever northwards and luckily the wind is light but the air seems very heavy and polluted which gave a rather spooky atmosphere to the day .We also received a sudden squall in the afternoon which took us by surprise but luckily no major damage. We make good progress to the next anchorage another oil terminal but cannot leave the next morning as the wind is over 30 kts and as usual on the nose. We realize we are not going to make Port Suez that day but luckily there are two more bolt holes available and by afternoon we can make another 10 miles to the next anchorage only sheltered by a reef from the sea but no shelter from the wind.
On Saturday 7.5.2011 we arrive in Port Suez which was rather an exciting moment! We only had 10 miles to sail and the Newport Channel marking the entrance is very well buoyed so easy to follow .We felt on familiar territory as we were in the company of many large ships so rather like Hong Kong! The Suez Canal yacht club is soon after the canal entrance and this is the waiting area for yachts to arrange their canal transit .It is a yacht club in name only as there are no facilities! The use of an agent is obligatory to arrange the canal transit so we left him to it and went to Cairo for a short trip. It is only two hours by bus on a good road and we managed the museum the pyramids and a camel ride..all good tourist stuff!
11.5.2011 we start the canal transit .Yachts cannot do it in one day so we have to sop at another yacht club in Ismailia on lake Tismah about half way .We had a pilot on board to guide us and it was a fascinating journey along quite a feat of engineering .the canal passes through two lakes Little Bitter and Great Bitter lakes then Timsah. Ismailia yacht club is similar to Port Suez and after checking the weather in the Mediterranean sea we decide to stay an extra night to avoid bad weather. Two other yachts decide the same but a very large German yacht who kindly shared several beers with us (our stocks are dangerously low by now ) decide go ahead.
As I write we are in the final transit of the canal and plan to anchor off Port Said and sail for Turkey on 14th May hoping the bad weather will have passed and we survive the final leg. 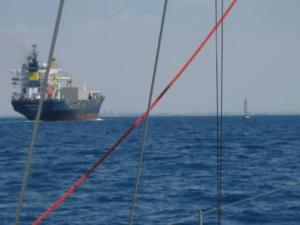 Suez canal yacht club with ship exiting the canal behind 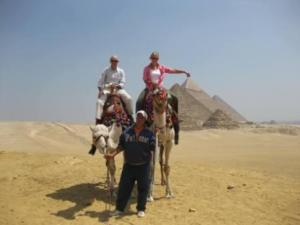 The inevitable tourist pic at the pyramids