“Flowers-r-us” and we are back in Polynesia again! After 20 hours semi –comatose at 35.000’ we arrived in Papeete to a traditional Tahitian welcome of garlands of perfumed flowers and the stirring rhythmical beat of drums. The next day we flew to Raiatea and had the first glimpse of Baringo on the hard looking as if she had missed us. We were staying in the wonderful Raiatea Lodge nearby and were greeted with a flower filled room and a delightful dinner, not only tasty but a creative work of art .We enjoyed many more during our stay there. 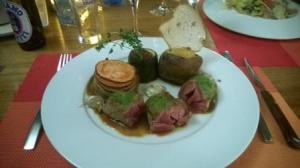 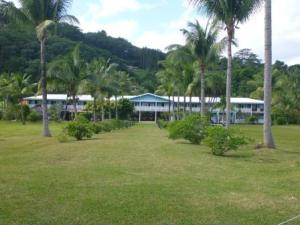 We were able to cycle to the boat yard every day so the work started straight the next day.On arrival we found the bilge was full of water which we presumed was rainwater as the companionway hatch drain had blocked and overflowed. We pumped the bilge dry and at least it was cleaner than it had been! There was little we could do over the weekend but on Monday the sails were taken away for repair and the dank mouldy smell in the boat gradually faded once the windows were all opened . We had rented a dehumidifier during our absence but it was not running when we first arrived so not sure how much use it had been used, but there was no mould and nothing had rotted so maybe it was worth it. The routine for the next few days was cycling to the boat in the morning, spending the day organising and doing the multitude of little jobs ,returning to the hotel in the evening for a refreshing swim followed by a wonderful supper on the hotel terrace .This was a perfect antidote to the day’s work in a hot ,dirty ,mosquito ridden ,noisy boat yard with minimum ablution facilities. By Thursday we decided to have a break and we hired a car to drive around Raiatea. We spent the morning looking for a new gas regulator as ours had corroded during our absence. We did not succeed but after seeing another model in one of the shops we realised we had a suitable one in our own collection which we had acquired in the various countries we had visited since leaving Hong Kong! We finally started the journey and found the island very dramatic with high central mountains , rivers and waterfalls and a beautiful coastline .It is, rather unfairly , not the most lauded   Society Island   probably because there are no long sandy beaches but this means fewer visitors leaving it more deserted for the discerning traveller . 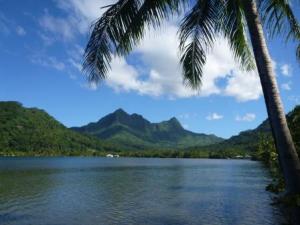 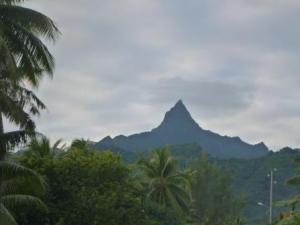 Back to work again with the repaired sails returned, sadly not all repairs completed but an improvement. We put the sail bag up followed by the mainsail after we had renewed all the lazy jacks .Gradually Baringo was returning to her former beauty . We attached the anchor chain and were ready to go ……but oh dear an unforeseen public holiday delayed us by another day! We were set to go the next day but on Polynesian time it happened the following day. This did allow John a day to replace all the Raymarine instruments. The screens had gone black over the last season so were unreadable. We had managed to get replacements in Hong Kong so after John’s electrical handiwork we can now see the depth, speed etc which is quite an advantage!

Baringo on the hard nestling in the palm trees

on the way to the launch 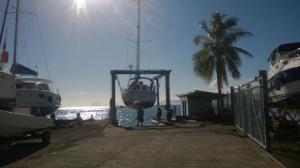 into the water- nerve wracking!

1st July and we were afloat at 13.00 ! The yard is quite small so two boats had to be moved to allow us out in the crane and we were lowered gracefully without incident and no leaks (yet ). We had noticed a small problem of persistent fresh water in the bilge since we pumped out the large amount we had found on arrival …..but from where ? We left the yard for a nearby mooring to finish the remaining jobs and get the foresails up. John’s closer inspection then revealed a leak from the hot water tank maybe it had been there for a while and we had explained the presence of the fresh water as coming from the fridge but it certainly explained the large amount of water when we first arrived ..the contents of the hot water tank. Luckily we had left the main water tanks empty otherwise there would have been more. How to mend it? This was for the next day.

The wind is lightest in the early morning so we were up at 6.00am to hoist the foresails. We hoisted the first time but forgot the battens so had to drop the sail, up again and the furling line was the wrong way so drop again and corrected. Up again ….no… we now had a halyard wrap so it was up the mast for John this time to unwrap it! Finally for the third time we hoisted the sail just before the wind picked up so no time to hoist the second foresail! The morning had not gone quite as we expected!! Jet lag?

The yard were able to help with the water tank which they removed and mended by welding it .The weekend arrived and everything closed, the weather deteriorated so we were storm bound on the mooring swinging wildly with heavy rain and winds up to 37 kts but protected by the reef the sea stays relatively flat. Many boats arrived near us over the course of the weekend seeking shelter from the bad weather which was not what we expected at this time of the year.